Spiraea cantoniensis is a deciduous or sometimes semi-evergreen shrub with showy clusters of white flowers in the middle of spring.  They don’t last long but the effect of massed flowers is quite spectacular.  Small rose like flowers have 5 or many more petals and they are borne in round clusters(corymbs) about 5-6cm in diameter.

S. cantoniensis is native to China in the province of Jiangxi and has been widely cultivated elsewhere in China and Japan for many centuries.

See above how the plant has a nice arching effect.  This plant is also known as ‘Reeves spirea and bridal wreath and May bush, although many people will automatically call a Spiraea a may bush, it may not really be known as one.  Again, the need for scientific names is critical.  The name ‘May Bush’ relates to the fact that it flowers in the month of May in the Northen Hemisphere.  Usually late September and October and early November in the Southern Hemisphere.

This Spiraea will generally grow to about 1.5 x 1.5 metres with arching reddish-brown stems and green lanceolate toothed leaves to about 3-5cm long.  The leaves will turn yellow in Autumn but sometimes they will persist.  This plant will grow in sun or part shade in most soil types and doesn’t mind a bit of neglect now and then.  Best if left unpruned if possible because this keeps its natural mound of gracefully arching stems.  Frost and drought tolerant and best in a mixed shrub border or as a specimen plant or even a hedge would look stunning.

Another view of the arching stems, magnificent!

Last but not least.  Enjoy! 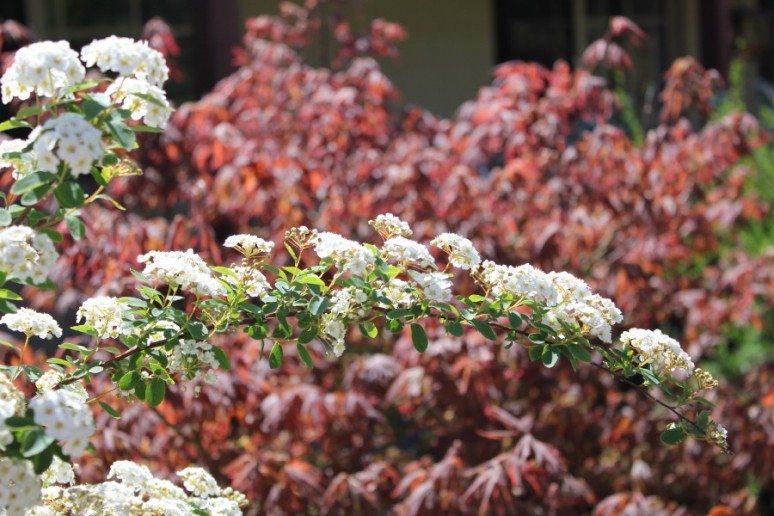