A visit to Beechworth on the Labour day weekend for our annual catchup with relatives highlighted again for me that there are plenty of trees here that are of majestic proportion.  Majestic enough to even be on the National Trust Significant Tree register.  Fuelled by a chat to one of Janet’s nieces about trees,  I decided that an afternoon would be spent in the Town Hall Gardens in Beechworth where there are some lovely old trees.  Most of these magnificent specimens were donated by Ferdinand Von Mueller in 1875.  Click here to find out more about the great Von Mueller.

We will start with the Bunya Pine.  Araucaria bidwillii

I love how the branches radiate out from the trunk on this one.  Native to Queensland, this evergreen coniferous tree can grow to somewhere between 30-45 metres.  The Bunya Pine is the last surviving species in the section Bunya of the genus Araucaria.  Fossils from section Bunya have been found in South America and Europe.  This tree was around during the Jurassic.

Leaves of the Bunya above, bark below. 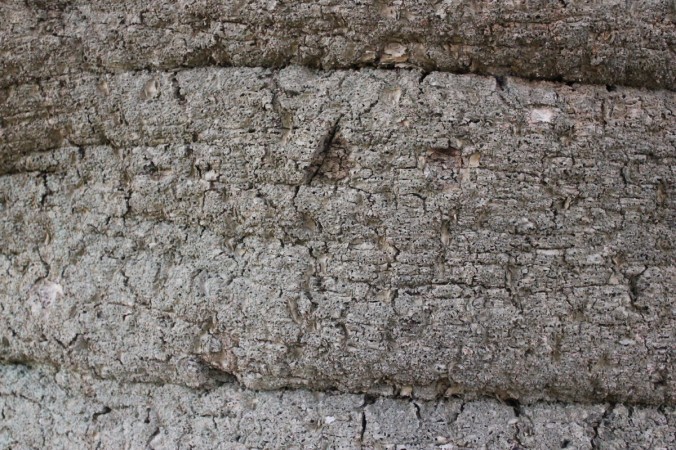 Caution must be used when standing under these tree’s.  Why?  Check out the photo below!

That’s part of the Bunya Pine cone!  Weighing in at an impressive 18 kg (roughly) and the size of a football.  a hard hat may be called for if you decide to spend an extended amount of time under the Bunya.  Living for about 500 years, the Bunya pine makes for an impressive looking tree in a weird sort of way! 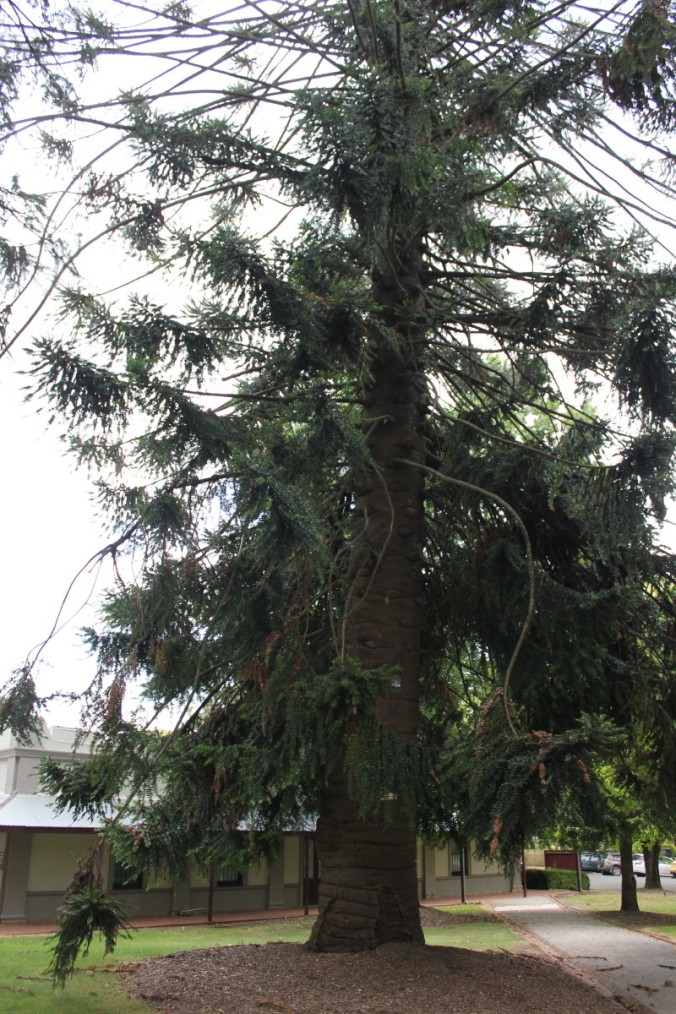 Next up we have the Atlas Cedar,  Cedrus atlantica 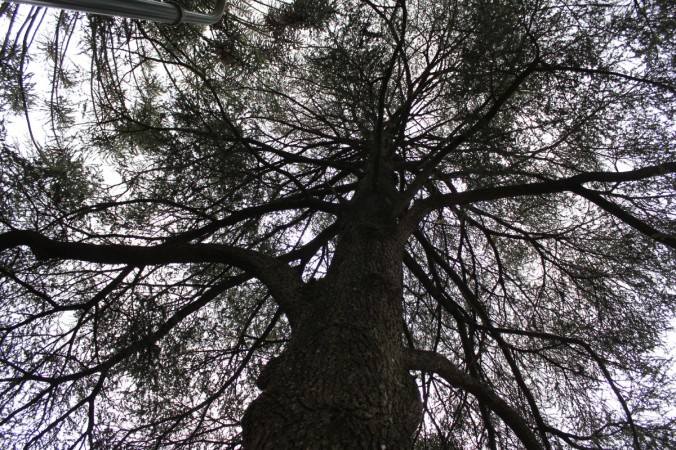 Atlas Cedar is a Cedar native to the Atlas mountains in Morocco, reaching a height of 30-35 metre with a girth of up to 2 metres.  Here is the bark with Lichen. 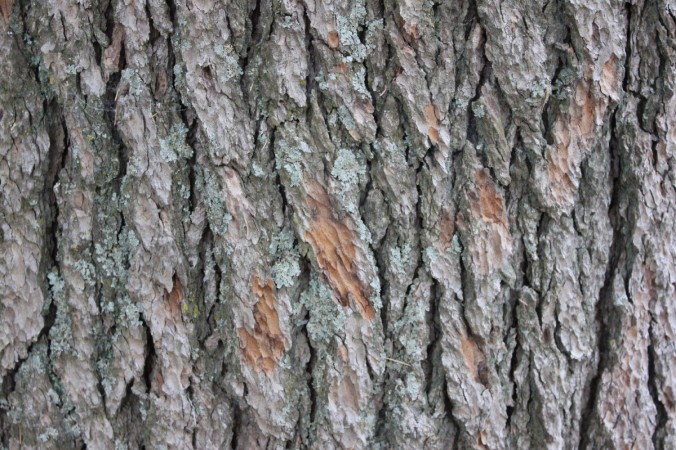 One of the smaller trees in this park is the Irish Strawberry Tree, Arbutus unedo .  Can be either a large shrub or small tree, grows to about 10 metres and native to Mediterranean areas and parts of Ireland.  It has white Erica like flowers that turn into large red berries, a bit like a strawberry!  Here are its leaves. 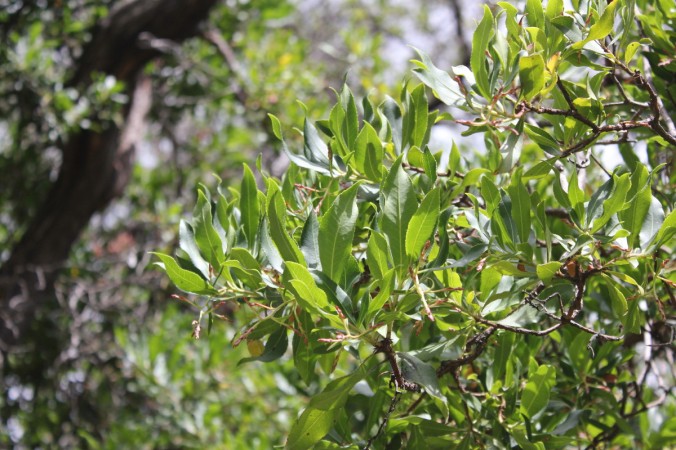 Arbutus unedo is normally multi trunked.  It was first described by Carl Linnaeus in 1753 in volume one of his landmark book Species Plantarum.  Click on his name to find out more. 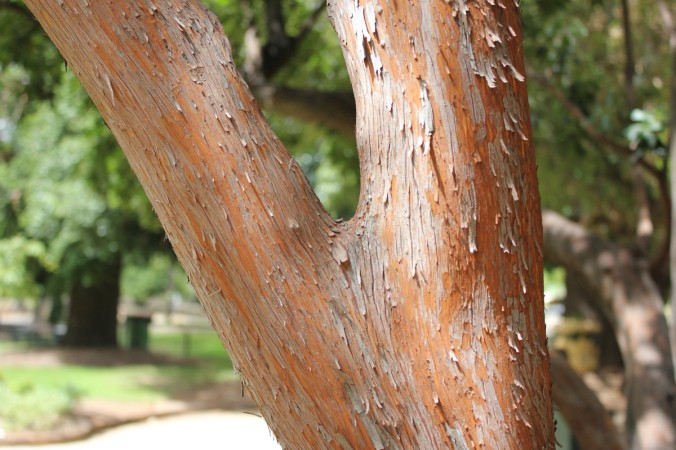 The bark of the Irish Strawberry tree is quite remarkable as well. 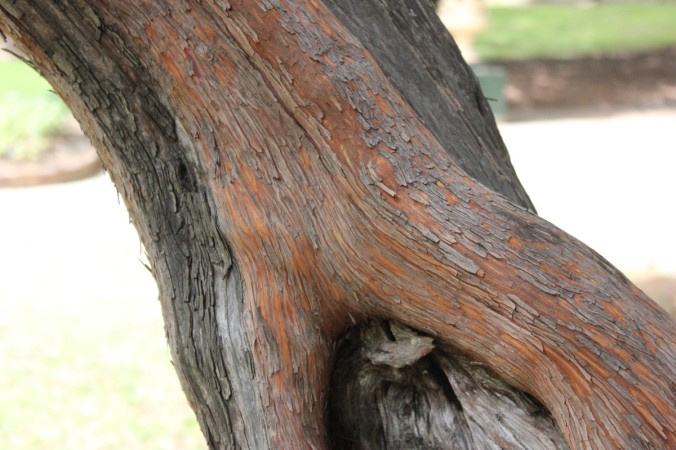 Another Cedrus here is Cedrus deodara, also known as the Deodar Cedar. 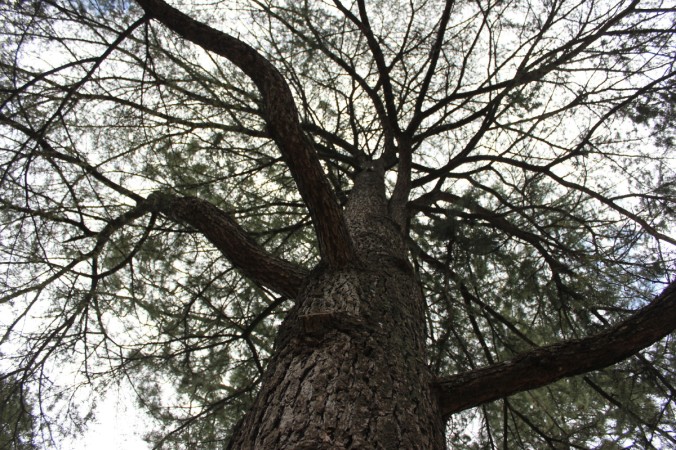 Bark above and cones below. 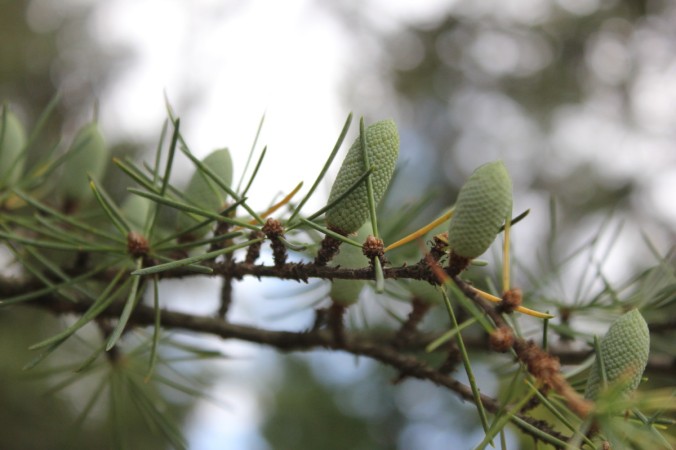 The Deodar Cedar is native to the Western Himalayas in Eastern Afghanistan through to Western Nepal.  Grows to about 40-50 metres and occasionally 60 metres with a girth of up to 3 metres.  This is also the national tree of Pakistan.

Next we have the Canary Island Pine, Pinus canariensis .

Obviously native to the Canary Islands, this is a sub tropical pine which doesn’t like cold temperatures.  Growing to about 30 – 40 metres but also able to reach 60 metres, with a girth of 2.5 metres.  It has extremely long leaves which are needle like, see below.

The bark is interesting as well.

Fun fact!  “The tree’s  long needles make a significant contribution to the islands water supply, trapping large amounts of condensation from the moist air coming off the Atlantic with the prevailing north-eastern wind (locally called “alisios”). The condensation then drops to the ground and is quickly absorbed by the soil, eventually percolating down to the underground aquifers”. 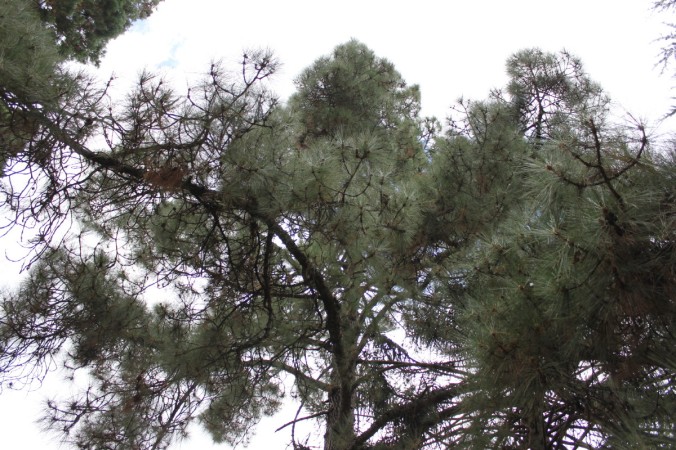 Lets have a look at the Western Yellow Pine, Pinus ponderosa .  This pine hails from the Western United States and Canada and is the official state tree of Montana.

Not sure where the top is in the above photo, in the wild one of these has been measured at 81.77 metres tall, now that’s tall!  Check out its bark, that’s pretty cool too! 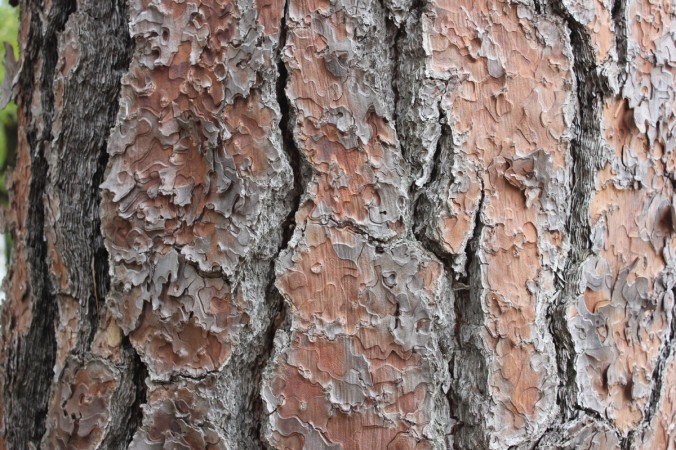 One more look at this tall tree. 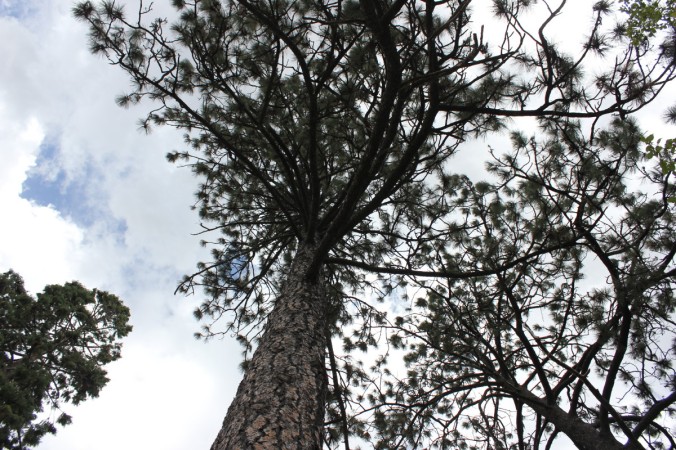 Now, finally to the mummy or daddy of them all.  Sequoiadendron giganteum .  The Sierra Redwood.  Although not the tallest tree in the world, that belongs to Sequoia sempervirens the coastal redwood, the Sierra Redwoods are the largest single tree’s and largest living thing (by volume) in the world.  The biggest one, known as General Sherman is 83.8 metres tall with a girth of 31.3 metres at ground level.  Yes, that’s not a typo!  31.3 metres at ground level.  That’s a volume of 1,486.9 cubic metres!

The bark can be up to 90cm thick, making it quite fire-proof.  The oldest known Sierra Redwood is thought to be 3,500 years old.

A large tree can have about 11,000 cones and surprisingly for such a large tree the cones are quite small.  Here’s a collection that someone’s gathered.

As the name may suggest, this tree comes from the Sierra Nevada Mountains in California.  Here’s a row of them below. 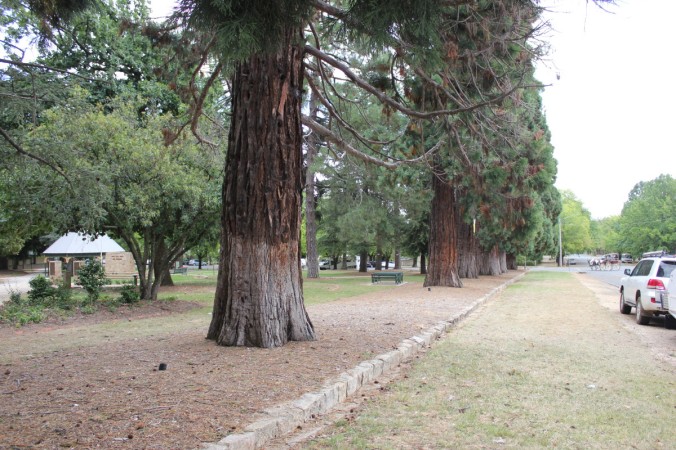 Here they are in their full glory 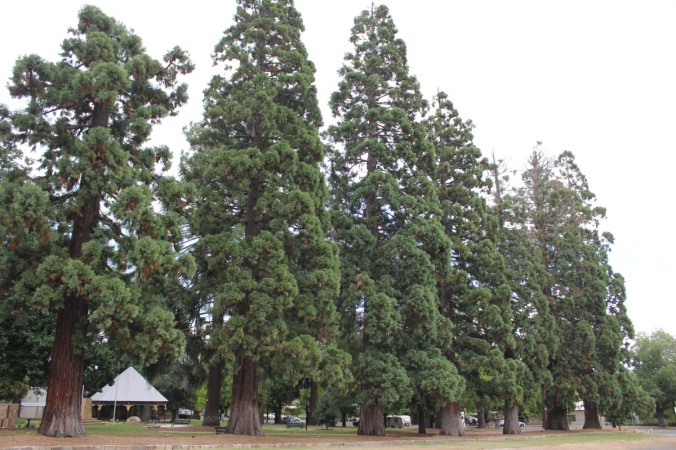 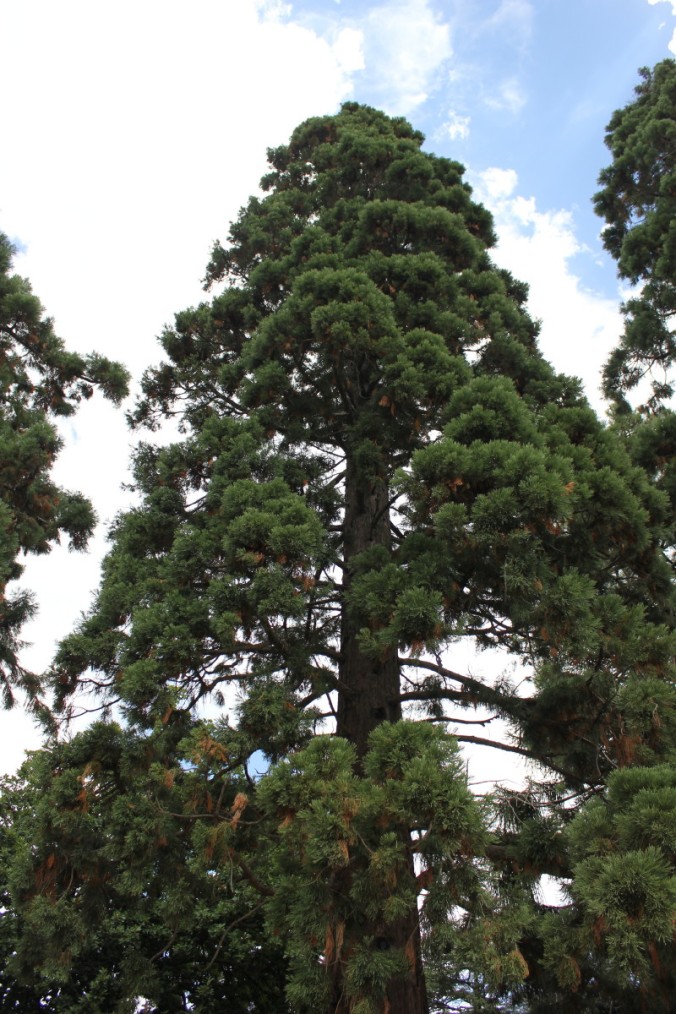 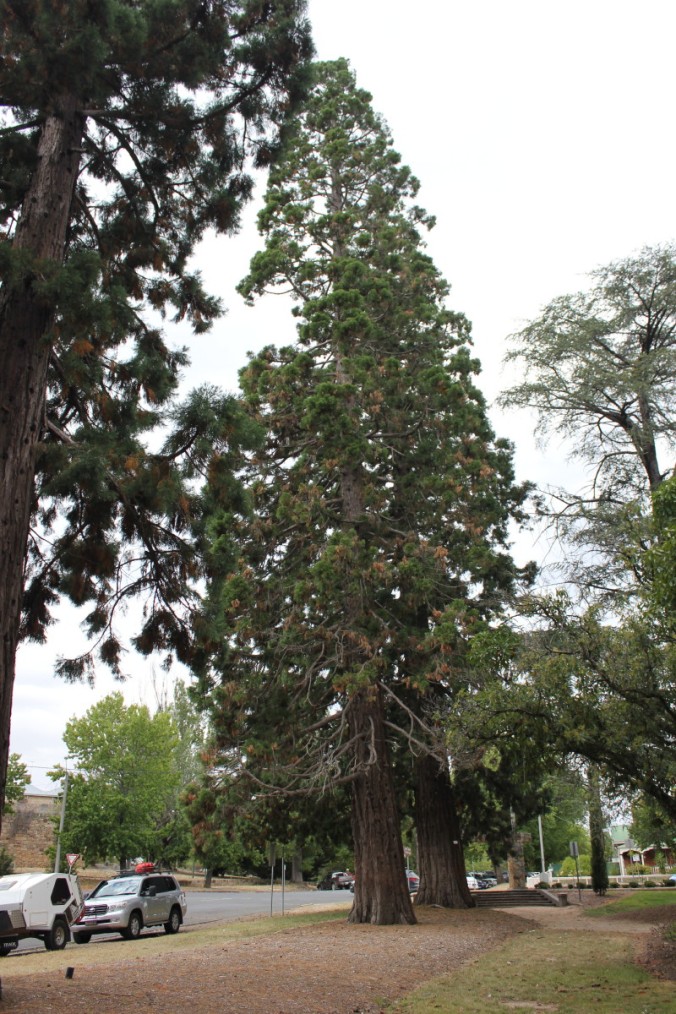 To finish off, here is a small plaque in the gardens, nodding to the great botanist Ferdinand von Mueller, who had the foresight to donate these tree’s and seeds for future generations to enjoy, not only here but  in many public gardens and Botanic gardens throughout the state.  Thankyou!